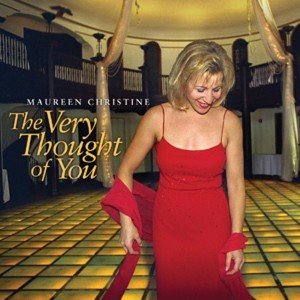 The Very Thought Of You

This second album for Chicago cabaret singer Maureen Christine is a notable step forward from her first release, not that there was anything technically or stylistically wrong with the vocalizing on the first CD. The problem was the play list and arrangements, which were pretty much limited to sad songs done in a torpid tempo. Christine has added rays of sunshine to the repertoire of this CD, bringing a welcome balance to it. The medley of "Blue Skies"/"Zip-a-Dee-Doo-Dah" zips along at a high-stepping pace with Jim Massoth's sax leading the way. Even on the slower material, still Christine's bread and butter, there seems to be renewed vigor. "Embraceable You" finds the singer with strings, with the middle register clarinet of Steve Leinheiser providing a strong base for the singer to rest on. This is a pleasant arrangement of a classic standard. Like many of her cabaret peers, Christine seems swayed by the songs of Barry Manilow, here represented by "All the Time," sung with obvious feeling. On "Climb Every Mountain," Christine displays a wide range, reaching the high notes without strain or screech. Of all the tracks on this very fine collection of songs, "Listen to My Heart" captures the heart and soul of cabaret (viz., a pretty tune with a story to tell sung by a natural storyteller with a natural melodious, expressive voice). Scott Metlica's flute adds a good deal to this track. Much of the credit for this release should go to musical handyman Bobby Schiff, who helped with the arrangements, played piano on several of the tracks, and, as string orchestrator, was responsible for assuring that the strings stay jaunty not drift off into dreariness. This is a fine second outing which is highly recommended.

Save this product for later
Display prices in: USD
bottom of page